gi-Geldinstitute published „For the good of all – Why standards are so important“, A plea for future-oriented minimum standards in the CIT industry, underlining Prosegur‘s frontrunner role as resilient infrastructure provider in the security and cash management industry. 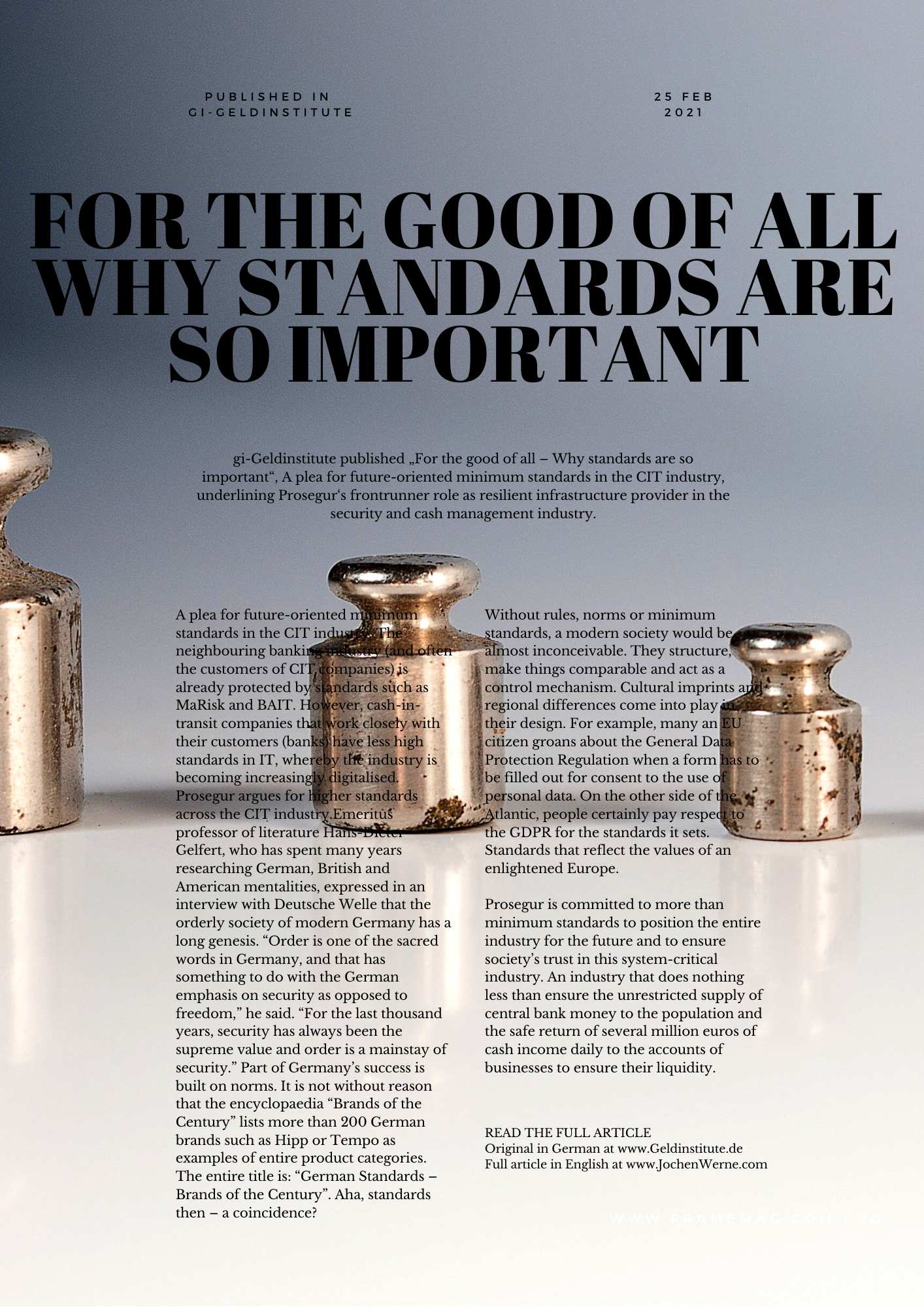 A plea for future-oriented minimum standards in the CIT industry. The neighbouring banking industry (and often the customers of CIT companies) is already protected by standards such as MaRisk and BAIT. However, cash-in-transit companies that work closely with their customers (banks) have less high standards in IT, whereby the industry is becoming increasingly digitalised. Prosegur argues for higher standards across the CIT industry.

Emeritus professor of literature Hans-Dieter Gelfert, who has spent many years researching German, British and American mentalities, expressed in an interview with Deutsche Welle that the orderly society of modern Germany has a long genesis. “Order is one of the sacred words in Germany, and that has something to do with the German emphasis on security as opposed to freedom,” he said. “For the last thousand years, security has always been the supreme value and order is a mainstay of security.” Part of Germany’s success is built on norms. It is not without reason that the encyclopaedia “Brands of the Century” lists more than 200 German brands such as Hipp or Tempo as examples of entire product categories. The entire title is: “German Standards – Brands of the Century”. Aha, standards then – a coincidence?

Without rules, norms or minimum standards, a modern society would be almost inconceivable. They structure, make things comparable and act as a control mechanism. Cultural imprints and regional differences come into play in their design. For example, many an EU citizen groans about the General Data Protection Regulation when a form has to be filled out for consent to the use of personal data. On the other side of the Atlantic, people certainly pay respect to the GDPR for the standards it sets. Standards that reflect the values of an enlightened Europe.

Own rules in the business world

Beyond social norms and local legislation, there are other rules in the business world. There is hardly an industry that has not already given itself a catalogue of minimum standards. This is an advantage for many, because the complexity on the supply side is often reduced for those asking. But the question must be allowed whether minimum standards are sufficient and whether they all focus on the well-being of customers and society. Too often the focus is on the providers. Yet there are standards that need to be established today in order to prepare for future challenges.

Prosegur is committed to more than minimum standards to position the entire industry for the future and to ensure society’s trust in this system-critical industry. An industry that does nothing less than ensure the unrestricted supply of central bank money to the population and the safe return of several million euros of cash income daily to the accounts of businesses to ensure their liquidity.

A look at the customer environment reveals that the related banking industry is leading the way: with MaRisk (Minimum Requirements for Risk Management) or BAIT (Bank Supervisory Requirements for IT), credit institutions have positioned themselves for the future. Since banks usually cooperate with a cash-in-transit company, it is only logical for Prosegur to apply these already existing requirements in an identical manner to its own business operations today and consequently to demand rapid implementation from all providers of cash and valuables transport.

All players operating in such an important part of our economic life must keep their eyes on the future and never cling to the status quo. Today, topics such as digitalisation and environmental protection naturally belong in the programmes of sustainably oriented companies. Every organisation needs courage, creativity and a willingness to invest in finding a digital language for analogue solutions. This fact is of particular importance in the Corona pandemic, because it acts as an accelerator for the global digital transformation.

Politicians underlined that they have recognised this on 9 December 2020 with the BMI’s draft bill for a second law to increase the security of information technology systems. But even before the draft becomes law, the following applies to Prosegur: the further development of current standards, investment in sustainable technologies and personnel as well as in the certification of processes and models must absolutely be in the interest of every serious money and value service provider already today.

Resilience through standards and digitalisation

It is essential to arm oneself against all kinds of threat scenarios – known and new, present and future – and to become resilient against external shocks. To be resilient so that, as a critical infrastructure, citizens can access money even in crises or exceptional situations. And to offer support to other critical infrastructures to also become resilient in order to avert supply bottlenecks for the population in cooperation. Prosegur consistently pursues this maxim, among other things with the smart cash procedure, in which cash receipts, for example in the supermarket or pharmacy, are deposited in a smart safe, where they can be credited to the business account via Early Value. Independent of the physical collection of the money, the company can use it to do business. A lack of liquidity does not become a showstopper for supermarkets and pharmacies in times of crisis. They remain open and the supply of goods and medicines is maintained. In the impulse paper “Resilient pioneers from business and society” of the German Academy of Science and Engineering (acatech), Prosegur Smart Cash was presented in December 2020 as a resilient concept for success.

Standards create resilience. So what standards should the cash and cash-in-transit industry additionally orient itself to? In Prosegur’s opinion, the standards of the credit institutions with which the cash and valuables transport industry cooperates on a daily basis. Not only in terms of their own resilience, but also in order to be a true partner for customers with their very own challenges in the low and negative interest rate environment, in the digital transformation and in the climate crisis. Then the players in this industry not only transport, process and store values, they also embody them and prepare to take on even greater responsibility in the “cash cycle” value chain.