Professional know-how and the right feeling for changing customer needs are essential factors in being able to innovatively develop needs-based solutions for our customers.

The entire roundtable talk in the current print edition or soon online at www.Geldinstitute.de

HOT OFF THE TAPE: Business Transformation in the Digital Age – Insight into Practice from an Expert’s Perspective

It was a great pleasure being invited as guest to the brand new podcast format POLEDIFY. With Poledify, Felix Gehm offers insights into the routines, mindsets and habits of experts and thought leaders from a wide range of disciplines.

Listen to the Interview HERE

Jochen Werne is Chief Development Officer and Chief Visionary Officer of Prosegur Germany. Prosegur Group is one of the leading security service providers worldwide with over 175,000 employees on five continents. Jochen Werne is, among other things, a member of the Learning Systems Platform, which advises the German government on artificial intelligence, and of the Royal Institute of International Affairs Chatham House, one of the most important think tanks in the world. Jochen was listed as one of the AI experts in Germany by Focus magazine. He is also an author, keynote speaker, internationally awarded NGO founder and specialist in business development and transformation, and international diplomacy. In 2020, the Tyto Tech Power List named him one of the 50 most influential people in the tech scene in Germany.

Topics of this episode:

Questions, criticism, suggestions or anything else? Write to me!
Instagram: https://www.instagram.com/poledify/
Twitter: https://twitter.com/ThisIsFelixGehm
or simply send an email to poledify@gmail.com
Where does the fine music (intro & outro) come from?
The fine music in the intro and outro is produced by pads. Behind the artist name is Patrick, who has finally decided to record all his little songs. You can find it all here:
YouTube: bit.ly/33TOFcN
Instagram: https://bit.ly/2XWFDIm
Soundcloud: https://bit.ly/3oYQA8k

An event organised by acatech – the National Academy of Science and Engineering which is the voice of the technological sciences at home and abroad. acatech provides advice on strategic engineering and technology policy issues to policymakers and the public. The National Academy of Science and Engineering fulfils the mandate to provide independent, evidence-based advice that is in the public interest under the patronage of the Federal President.

A debate organized by acatech

The host is discussing these and other questions with guests from business and research on 5 March.

Impulse/Podium:
DATA, VALUES, VALUE CREATION – WHERE IS THE JOURNEY GOING?

Registration:
Admission free; registration required. Please register under the following link, all registered will receive the access link before the event.

Link to the registration

It has been a privilege contributing as co-author for the fifth time to an inspiring book project. “CRM goes digital“ has been initiated by Dr. Martin Stadelmann, Mario Pufahl and David Lauch and is part of the Springer Gabler Edition Sales Excellence book series (ESE)

A special encounter. Algorithms developed by humans meet everything that man and nature embody – from industrial processes to our very own behaviour. A race between countries and companies has begun to decide the enormous potential of AI and its impact on our consumer behavior, as well as on our society. However, despite all the euphoria, it is important to understand the topic, its possible applications and also its limitations well, so as not to succumb to the danger of losing oneself in technology-believing magic.

About the book: CRM goes digital

Consistent customer orientation and digital transformation lead to completely new approaches in management: the focus is on omnichannel or mobile CRM concepts, big-data and social media instruments, and automation. But what does this mean in concrete terms for marketing, sales and service? What effects does digitalization have on product and service optimization or on sales management and customer loyalty? How can methodical customer orientation contribute to an improvement in sales performance? Answers to these and other questions are provided by the contributions from science and practice in this book. The authors illuminate the requirements and possible solutions of CRM systems along the concept of the customer journey using selected industry examples. They provide concrete recommendations for action and offer managers and users from customer-oriented business areas valuable orientation aids for the implementation of digital customer management.

Thank you very much Stefanie Milcke for the friendly invitation to this inspiring marketing meetup in the age of Corona!

It’s all about when and in what form marketing makes sense in such extraordinary times, and possibly even makes companies emerge stronger from the crisis. Certainly, as in any crisis, transparent communication to the outside world, but above all internally, is the ultimate discipline.

Message from the organizer

Preparing for the second half of digitisation.

Looking at the world sometimes gives the impression that things seem to be much better outside Europe. Examples? The world’s largest airport, Beijing-Daxing, goes into operation after four years of construction, while at BER, construction continues after 13 years. The coffee house chain Luckin Coffee, valued at $4.5 billion, will replace Starbucks as No. 1 in the Chinese market by the end of the year, two years after its foundation. Digital platform companies such as Apple, Amazon, Alphabet, Tencent & Co. have left the traditional commodity and industrial groups behind in terms of value.

What made these American and Asian companies so big? Absolute willingness to implement at high speed, massive state and private investments, sometimes industrial policy intervention, huge, scalable domestic markets and a just-do-it mentality favour economic and technological development alongside a number of other factors.

Is Europe, on the other hand, in a downward spiral? Is the continent now losing the much-discussed second half of digitisation, which is mainly about the digitisation of industry, now that the B2C race seems to be lost?

The recent history can also be told in a different way. The financial crisis of 2008/2009 has shown how valuable Europe’s and especially Germany’s strong industrial core is. A highly specialised, excellent SME sector and the leading groups from mechanical, plant and vehicle engineering to the pharmaceutical and chemical industries are anchors of stability. With Industry 4.0, the vision for the future of value creation comes from Germany, and there is a worldwide competition for its widespread introduction.

The strength lies in product innovation, especially in complex products such as machine tools, medical devices, vehicles or building services engineering. Germany also has world market leaders in engineering and in production and automation technology. Despite all the negative predictions, Germany has further expanded its strength in networked physical platforms with the integration of IoT, data and services in industrial environments and has secured a very good starting position. The German research landscape also holds an internationally good position in areas critical to success such as semantic technologies, machine learning and the digital modelling of products and users. And let’s not forget that the companies in the country have produced outstanding software products for the fast, reliable and scalable processing of big data and the integration of business processes.

While Germany wants to consolidate its pioneering position as the world’s supplier, the USA is relying on its expertise as a global networker and China is relying on short decision-making paths, capital intensity and a large domestic market in which it can scale quickly. In this situation, it is important that we concentrate on our strengths and resolutely tackle the digitization of industry and SMEs. However, this requires a much faster entry into the emerging B2B platform markets.

In Europe, we stand for a liberal value system, both economically and politically, which, as in the past, has proven to be the decisive differentiating factor in the medium and long term. The debate on the use of data is conducted in Europe in good tradition at an extremely high level and this in the good understanding that digitisation is not coming over us, but is made by people and is intended to serve them.

It is therefore the right moment to take a decisive step towards the future and to open up Europe’s path. To do this, we need a large, homogeneous domestic market that will make us almost competitive with the USA and China. We also need substantial investment in digital infrastructure and cybersecurity, as well as training and further education. Both competitive regions currently have the power to set standards in digitization as well. The goal of the European Union to create a single digital internal market is laudable, but final implementation is still pending. This implementation, however, is the important and very concrete next step in order to be able to achieve the competition-relevant scaling effects and to be able to play a competitive role in data-based business model innovations.

The second half is running and nothing is lost.

Jochen Werne (48) is a member of the Executive Board and Chief Development Officer of Prosegur Cash Services GmbH, as well as a member of the Artificial Intelligence Learning Systems Platform and the Royal Institute of International Affairs, Chatham House.
LinkedIn: https://www.linkedin.com/in/jochen-werne-2292507a/
Twitter: @WerneJochen
E-mail: jw@JochenWerne.com

Dr. Johannes Winter (42) heads the office of the Learning Systems Platform and the technology department at the German Academy of Science and Engineering (acatech).
LinkedIn: https://www.linkedin.com/in/johannes-winter-13048629/
Twitter: @jw4null
e-mail: winter@acatech.de

It’s a great pleasure supporting on October 28, this year’s DIGITAL SUMMIT together with other experts from the “Platform Learning Systems, the Platform for Artificial Intelligence” #DigitalGipfel19 #platformeconomy

The Digital Summit (previously the National IT Summit) and the work that takes place between the summit meetings form the central platform for cooperation between government, business, academia and society as we shape the digital transformation. We can make best use of the opportunities of digitisation for business and society if all the stakeholders work together on this.

The National IT Summit was renamed the Digital Summit in 2017. This was to take account of the fact that digitalisation comprises not only telecommunications technology, but the process of digital change in its entirety – from the cultural and creative industries to Industrie 4.0.

The Digital Summit aims to help Germany to take advantage of the great opportunities offered by artificial intelligence whilst correctly assessing the risks and helping to ensure that human beings stay at the heart of a technically and legally secure and ethically responsible use of AI.

The Digital Summit looks at the key fields of action within the digital transformation across ten topic-based platforms. The platforms and their focus groups are made up of representatives from business, academia and society who, between summit meetings, work together to develop projects, events and initiatives designed to drive digitalisation in business and society forward. The Summit will serve to present the results of the work that has been done in the past, to highlight new trends and discuss digital challenges and policy approaches.

Also in the second part of our interview we do not go directly into the technical aspects of the introduction of artificial intelligence.

Based on the question “How do you get all this under one roof?” we get a look at Jochen’s personal insights and points of view and at how each individual can counter the increasing autonomisation and the change of the working world and society through algorithms with a corresponding attitude.

Jochen Werne is full-time Director & Authorized Officer for Bankhaus August Lenz & Co. AG of the Mediolanum Banking Group and is responsible for Business Development, Marketing, Product Management, Treasury & B2B Payment Services. In addition, he is involved in the development of non-profit organizations and a member of the Learning Systems Platform of the Federal Ministry of Education and Research.

The initiative www.wegofive.net addresses the question of how a unit of man and machine can be created in the working world of tomorrow and how algorithms can be seamlessly integrated into the organization in order to supplement the capabilities of employees.

Many thanks to the coast by east Hamburg in the Hafencity Hamburg for the permission to film here. A very recommendable location with obliging service, extraordinary menu and good drinks. Apropos, the background noises also give you the feeling of sitting directly with us 😉 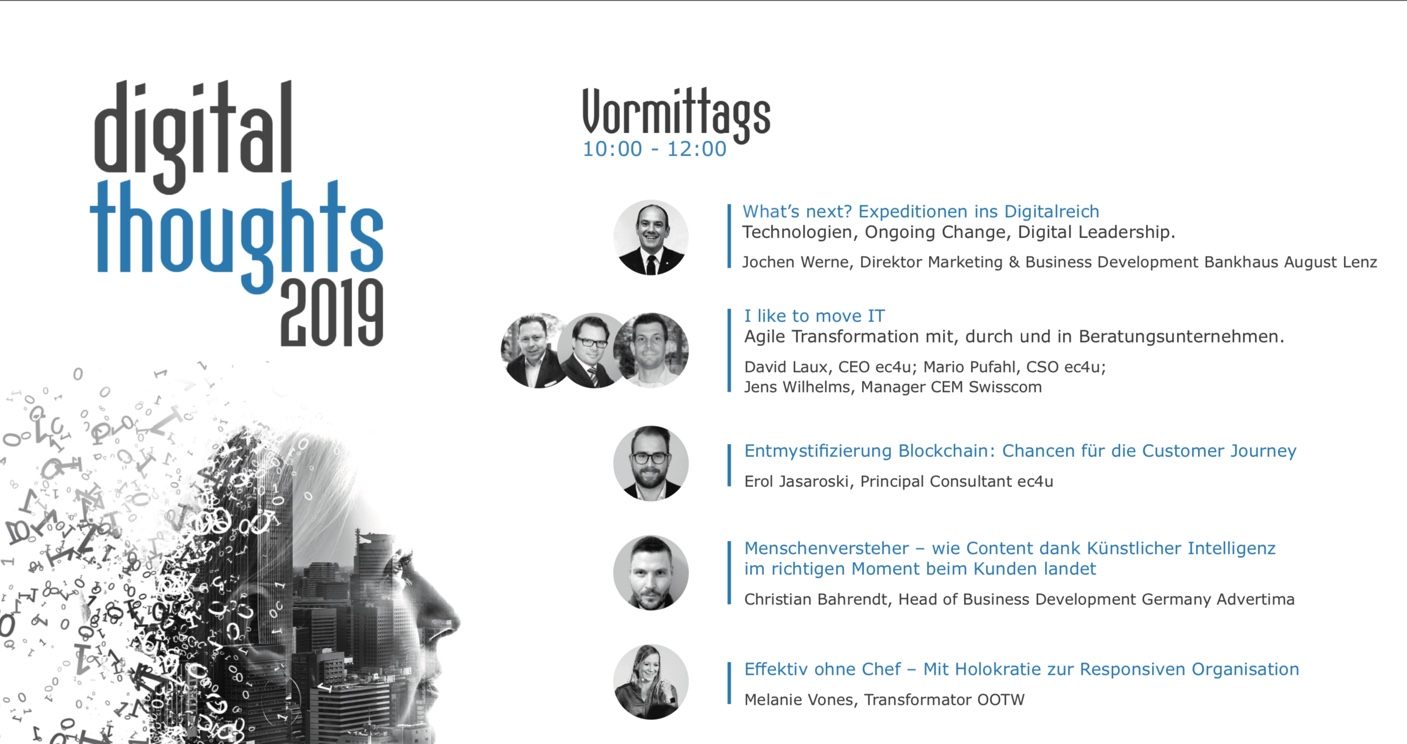 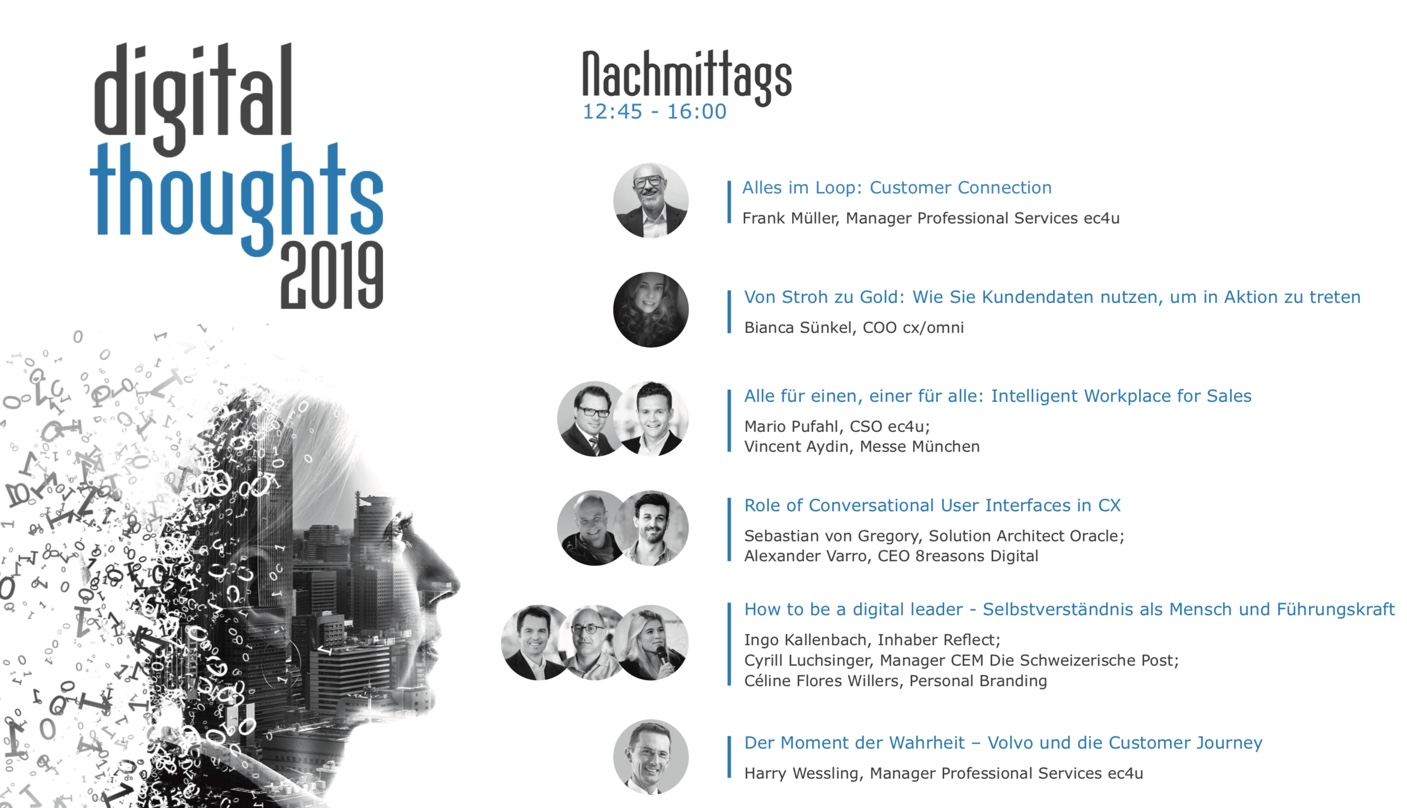